The UV-resistant weather-resistant ASA resin is formed by blending a polyacrylate core-shell copolymer (ie, PBA-MMA) with SAN, which can significantly improve the weather resistance of ASA resin and low-temperature or normal-temperature impact resistance without affecting other physics of ASA resin. performance. ASA resin has high UV resistance and weather resistance, is easy to process, has excellent surface finish, and maintains good rigidity. It can be widely used in various coextruded plastic products and films.

SAN, acrylonitrile-styrene copolymer material is one of the most widely used plastics. Acrylonitrile-styrene copolymer has high gloss, high transparency, high impact, good heat resistance and mechanical properties, but impact resistance. Low temperature resistance is not good, so it is usually used as a daily necessities. The copolymer formed by grafting an acrylic rubber body with acrylonitrile or styrene is an ASA resin. Compared with ABS, ASA replaces the unsaturated double bond in ABS with an acrylic rubber containing no unsaturated double bond. Butadiene rubber, therefore, not only resists degradation, aging, fading caused by ultraviolet radiation, but also has a strong guarantee for decomposition or discoloration caused by high temperature in the oxidation process in the atmosphere, thereby greatly improving the material. Anti-aging and weather resistance. According to the test results, the anti-aging performance of ASA is more than 10 times that of ABS. The existing ASA is produced by a blending process, and the main raw materials are ASA powder and AS resin as well as colorants, antioxidants, internal and external lubricants, and the like.

The UV-resistant weather-resistant ASA resin is formed by blending a polyacrylate core-shell copolymer (ie, PBA-MMA) with SAN, which can significantly improve the weather resistance and low-temperature or normal-temperature impact resistance of the ASA resin without affecting other physical properties of the ASA resin. performance. ASA resin has high UV resistance, easy processing, excellent surface finish and good rigidity. It can be widely used in various co-extruded plastic products or other plastic products, including but not limited to ASA film. The polyacrylate core-shell copolymer is grafted with methyl methacrylate and acrylonitrile-styrene copolymer to form a graft copolymer of ASA resin structure, which is excellent in ultraviolet resistance and weather resistance.

The ASA resin also includes a styrene-maleic anhydride graft polymer (referred to as S-MA) in an amount of 1-5% by mass, wherein the addition of SM can sufficiently improve the compatibility of each component in the formulation. Sex, does not precipitate during coextrusion, and improves the adhesion of the coextruded layer. ASA resin also includes mica powder with a content of 1-10% by mass, and matt effect is achieved by adding mica powder. In particular, ASA resin can be used in daily necessities, automobile parts or accessories to form a better texture. Preferably, the content of the acrylonitrile-styrene copolymer is 40-60%, and the content of the polyacrylate core-shell copolymer is preferably 30-45%, more preferably 35-40%. 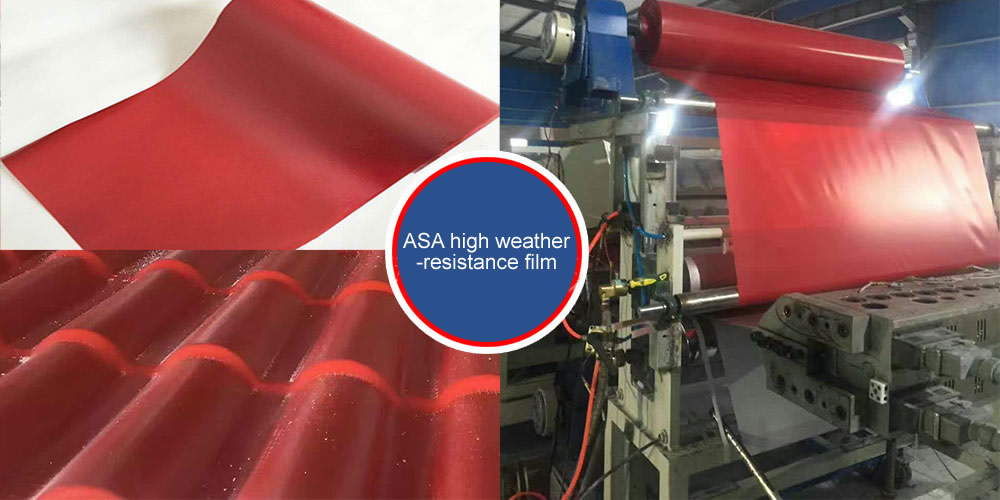