Innovation,creation,let green chemistry enter into our lives.
You are here: Home » News » Different specifications of Tween series products and applications in different industries

The main chemical component of the Tween series is polyoxyethylene sorbitan fatty acid ester. It is a non-ionic surfactant with a special odor, warm and slightly bitter. It is a series of polyoxyethylene dehydration. A partial fatty acid ester of sorbitol. It has been widely used in pharmaceutical, daily chemical, food, textile and other industries due to its effects of emulsification, diffusion, solubilization and stabilization. Polysorbates are generally considered to be non-toxic, non-irritating materials. In biological experiments, the emulsified protein, when used, Tween and the same type of Triton X-1OO (polyethylene glycol octyl phenyl ether) non-ionic detergent does not destroy the structure of the protein, can reduce the original between proteins Some interactions are destroyed. Ionic detergents such as SDS destroy the structure of the protein. As a blocking agent in biological experiments, the blocking agent should block all unbound sites without replacing the target protein on the membrane, the label that does not bind to the target protein, or cross-reacting with the antibody or detection reagent. Tween-20 has the function of refolding antigen, which can improve the specific recognition ability. When performing western blots, blocking the unbound sites on the membrane with an inert protein or a non-ionic detergent can reduce non-specific binding of the antibody. The most common blocking agents are BSA, skimmed milk powder, casein, gelatin and Tween-20 (0.05 – 0.1%) dilute solution. Often used as an oil-in-water (O / W) type emulsifier, so that other substances are evenly dispersed in the solution, mainly used in pesticides, food, cosmetics. Used in combination with other emulsifiers such as sodium lauryl sulfate or spar, it increases the stability of the emulsion. Tween can be used to dissolve essential oils in water liquids and fully function. Relatively speaking, Tween 20 is milder, and Tween 80 is more emulsifiable. In addition, in the pharmaceutical industry, it can be used as a solubilizer for certain drugs, with hemolysis, and Tween-80 is the weakest. After the aqueous solution is heated, it can produce turbidity, which is clear after cooling and does not affect the quality. It can interfere with the action of the bacteriostatic agent in the solution. Because the Span is an ester formed by sorbitol and different higher fatty acids, Tween is actually a series of products of the same type. It has different specifications in general fine chemical shops or chemical reagent companies, and can be selected according to different needs. For example, Tween 20 (TWEEN-20), Tween 40 (TWEEN-40), Tween 60 (TWEEN-60), Tween 80 (TWEEN-80), Tween 85 (TWEEN-85), Tween -60 is stearate and its appearance is amber wax. Tween-80 is an oleate with an amber liquid appearance. Tween-20 is a lauric acid ester and has a yellow oily appearance. It is a mixture of polyoxyethylene sorbitan monolaurate and a portion of polyoxyethylene bissorbitan monolaurate. 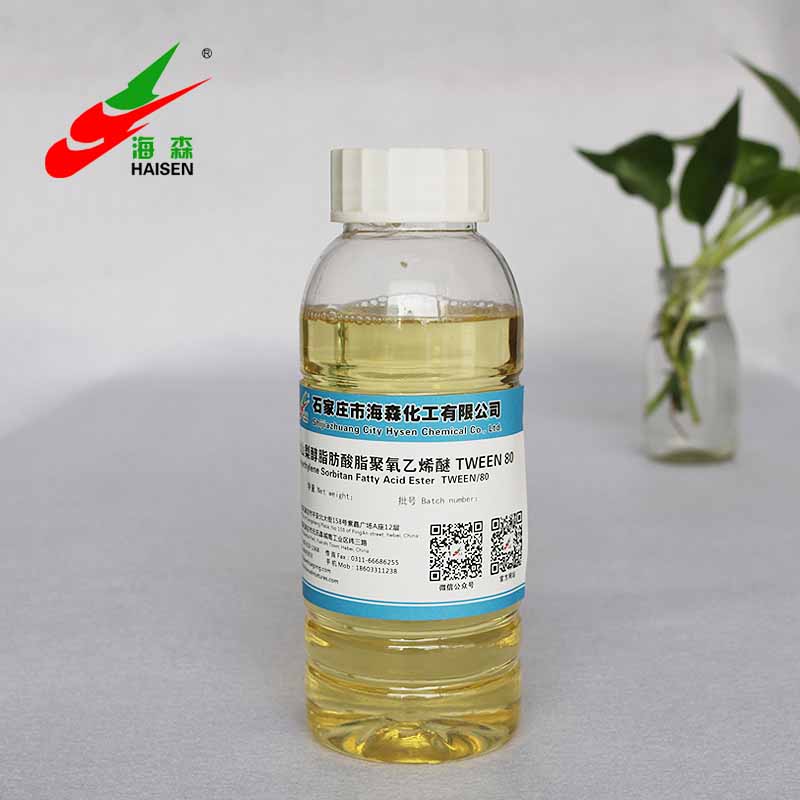