Innovation,creation,let green chemistry enter into our lives.
You are here: Home » News » Physical characteristics of triethanolamine and detailed application in different industry sectors

Triethanolamine is a colorless to pale yellow transparent viscous liquid with a slight ammonia odor and a colorless to pale yellow cubic crystal at low temperatures. The color gradually darkens when exposed to the air. Soluble in water, ethanol, acetone, glycerin and ethylene glycol, etc., slightly soluble in benzene, ether and carbon tetrachloride, and almost insoluble in non-polar solvents. Irritating. It is hygroscopic. It can absorb acid gases such as carbon dioxide and hydrogen sulfide. Pure triethanolamine has no effect on steel, niobium, nickel and other materials, but is highly corrosive to copper, aluminum and its alloys. Unlike monoethanolamine and diethanolamine, triethanolamine and iodohydrous acid can form iodide precipitates. Combustible. Low toxicity. Avoid contact with oxidants and acids.

Used as an emulsifier, moisturizer, moisturizer, thickener, and pH balance agent in cosmetics. It is used in cosmetic formulations to neutralize fatty acids with fatty acids and neutralize to sulfated fatty acids to form amine salts. Triethanolamine is a commonly used emulsifier in cream preparations. The cream product emulsified with triethanolamine has the characteristics of fine paste and bright white color. The colloidal phase formed by triethanolamine and higher fatty acid or higher fatty alcohol has good stability. The quality is stable and can accommodate a high proportion of external components. Triethanolamine is the most commonly used neutralizing agent for acidic polymer gels such as carbomer. Triethanolamine is neutralized with the carboxyl group of carbomer to form a stable polymer structure to achieve thickening and moisturizing applications. The addition of triethanolamine to a liquid detergent improves the removal of oily soils, particularly non-polar sebum, while improving the soil release performance by increasing alkalinity. And has excellent compatibility. Used as a complexing agent for aluminum ions in solution. This reaction is usually used in solution before complex titration with another chelating compound such as EDTA which forms a stable complex with most metal ions. The specific ions are "masked". Triethanolamine and its salt solution as cement clinker, engineering admixture and early strength agent in the grinding process can not only prevent the aggregation and air cushion of the powder during the pulverization process, improve the fluidity and packing density of the cement, but also reduce the pulverization. The power consumption of the machine. However, the extent to which heavy metals and radioisotopes in triethanolamine complex cement matrices increase their solubility remains an open question.

The oleic acid triethanolamine ester formed by the reaction of triethanolamine with oleic acid is an important preparation component for corrosion inhibitors in the mechanical processing industry such as boiler water treatment, automobile engine coolant, drilling and cutting oil, protecting metal surface and preventing oxidation. .

Used as a gas chromatographic fixative. It is a good solvent and moisture absorbent in the textile industry. It is the raw material of fabric softener. As an industrial gas purifying agent, it is used as an acid gas for removing hydrogen sulfide and carbon dioxide in exhaust gas treatment.

Triethanolamine is listed in the Chemical Weapons Convention because it can be used to make nitrogen mustard gas. 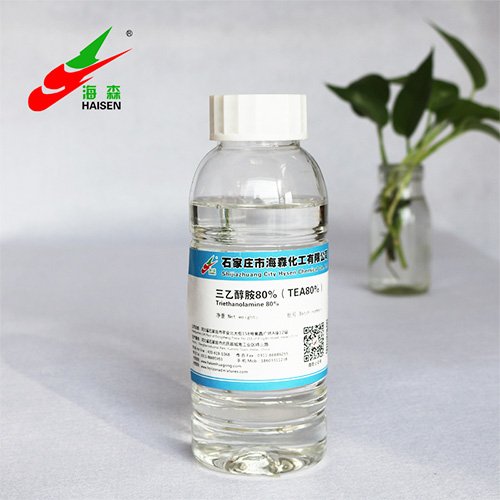 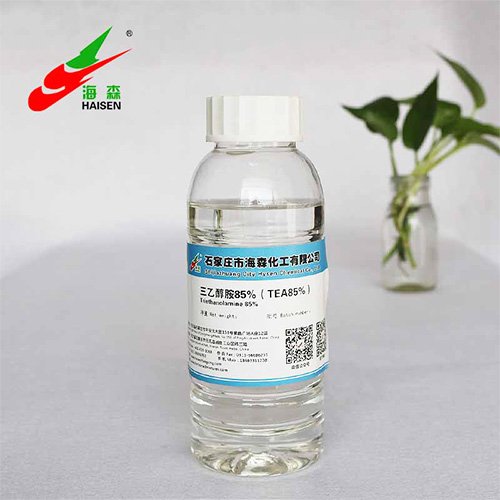